Eight months have passed since my DNF in the Vermont City Marathon and I started this blog about running and depression. I am no closer to completing 26.2 miles. My mile pace hovers in the mid-9s, same as always. In other areas of my life, though, I’ve made serious strides. I discovered the trail running community in my area, joined Friends of Fells, mastered a few of the circuit trails around here, made several new running friends, lost some weight and gained more energy, found a really great psychiatrist, committed to writing more, and became a better wife and mother.

I’ve thrown myself into a few causes since the election, too. My new hobby is reading books by feminists. I signed up for a “challenging racism” workshop. I’m writing a lot of op-eds to my local paper on topics such as a proposed voter ID law and sanctuary cities. Like, several op-eds. In fact, the newspaper put me on retainer. Yes, I’m that person. I know. I know! 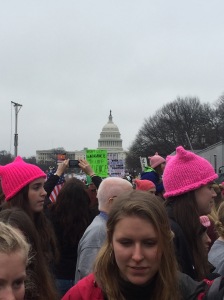 Pretty soon, people in my town will be turning their shopping carts around at the Shaws when they see the crazy local lawyer social justice lady coming down the aisle in her crazy running gear. But, so what. I am seriously happy. Seriously! So go ahead, naysayers, and turn your carts around, if you’re out there. I’m not interested in you, either.

How much of this progress is due to running? How much of it’s the Prozac?

Going to my PCP and asking for an antidepressant in April 2016 was a huge and important step in my life. It also happened during the peak of my 18 week training plan for the Vermont City Marathon. This is not a coincidence. Up to that point, I thought running kept me one step ahead of depression. Like a hamster on a wheel, I was always moving away from it, but never truly getting past it. I began doubting that I would make my marathon goal of a sub-4 hour race. Instead of taking this information “in stride” (the running metaphors are truly endless, aren’t they?), I spiraled downward. Running was no longer keeping the depression at bay. It became a catalyst. The hours spent running alone, sometimes in the dark, often on a treadmill, were punishing. I couldn’t answer truthfully if I even enjoyed running. I didn’t have a clue what I truly enjoyed. What happened after that is already well-documented on this blog.

So yes, running was, and continues to be, a crucial element of my ongoing recovery from depression and anxiety. For a long time, I considered it my last line of defense. When that defense started to fail, I knew I was in big trouble. It was the sign that I needed to get outside help, and by that I mean meds.

What I think is important for me to share with others, though, is the realization that running is not exactly the therapeutic balm that the New York Times and other leading media outlets would have you believe it is. Did you know there have been no fewer than 10 articles in the New York Times about recreational running since the beginning of the year? That’s a lot, don’t you think?  I’m always cautious when I see these stories because of the media’s tendency to over-sell running. Don’t get me wrong, it’s great, but running is not an end in itself. Running may help, but it will not (cannot) cure depression, anxiety, low self-esteem, eating disorders, body dysmorphia, addiction, or a whole host of other issues. It just won’t. This is probably self-evident to non-runners and especially medical professionals, but runners tend to be highly self-reliant and capable people. They do not shed their self-possession and control easily. In my experience, these traits inhibited me from dealing with mental illness for far too long. All the while, I was running, and running, and running some more…

I wouldn’t have sought help if I didn’t have a major depressive episode before the marathon. I wouldn’t have started this blog or writing again if I didn’t feel the need to process my disappointment and shame around the DNF. If it wasn’t for this blog, I wouldn’t have found a writing voice and the confidence to take on weightier, more challenging writing topics for publication. I may not have taken the time to think through and prioritize all that is important to me in my life right now, which finally allowed me to make the decision to go forward with the surgery on my femur. I had the consultation, and the surgeon described in detail how she would put a steel rod through the length on my femur to ensure that I would never break my leg from overuse. Imagine that! She (that’s right, the orthopedic surgeon at Beth Israel Deaconess Medical Center with the heavy bone drilling machinery is female) can’t make me any promises that I’ll be bounding up the Matterhorn in an endurance competition at age 55, but I certainly won’t be worse off for  having put a rod in my leg. I’ll take those odds.

My person, my soul, and my heart has this one, 5′ 4″ 130 ish lb. freckled body to take her across the finish line, whenever and wherever that may be. I’m keenly aware of the graying hairs, the fine lines appearing on my face, the slowly sagging eyelids.  I’ve found that moving forward through time requires a lot of… running. While I may not be a better person because I run, running has enabled me to find ways to be a better person. Does that make sense? It’s like a degree program of sorts. It’s where and when I study up and do the hard work. At least that’s one way to think of it, right now. It’s not the point, but it’s a big part of getting me where I’m going.

2 thoughts on “A Look Back: Running on Prozac.”