We’re in the mad dash to the end of the year, folks. Life starts picking up speed shortly after Labor Day and continues to gather momentum with each passing week. It goes something like this: my son’s birthday, our wedding anniversary, Halloween, day light savings, my birthday, Thanksgiving, my husband’s birthday, Christmas and New Year’s. And that’s just baseline busy. Throw in a trip to DC, a daughter with conjunctivitis, the sudden passing of a dear Aunt, and a jaw-dropping Presidential election, and all hell breaks loose.

Basically, the kids are on a mac ‘n’ cheese diet and baths have become the exception rather than the rule.

That training plan for the half? It went out the window weeks ago. Apparently the one thing I am consistent about over time is my inability to follow a training plan. I wish I could say that this self-knowledge is comforting in these turbulent times, but no… I’ve been getting out there, but not logging many miles. It’s been short, sporadic runs squeezed in at random times.

In spite of the anxiety creep, I generally feel satisfied with where I am with running right now. How could I not be? I’m getting a tremendous amount of enjoyment out of it. My life and running are more integrated now than at any other time that I can recall. I may not have accumulated the miles that I need to feel confident to run the half marathon in 3 weeks, but I also know that a half is not 26.2, and I can definitely muscle through it on race day. The question is, how slowly do I need to go to do it comfortably?

Here are some running highlights (or should I call them runlights?) from the past two weeks:

I convinced one of my oldest and best friends to run the Spooky Sprint 5k with me over Halloween weekend. It’s through our hometown, so of course her awesome mom showed up on the course to cheer on her 36 year old daughter and friend. That’s dedicated parenting right there.

My friend wants to get back into it and I’m proud to say this 5k with me was her first race in many years, since before she had her two babies. I totally remember that feeling. My first 5k after many years of not running was a Mother’s Day run through our town not even two years ago. On my first race post-babies I promptly peed my running shorts upon crossing the finish line. So in my mind, all my friend had to do was not pee and I would declare this first outing a resounding success. Suffice to say, neither of us wet ourselves. Hashtag winning!  Joking aside, I still let go every once and awhile, and my baby is almost three. Can’t help it, guys! It is what it is. How do I handle it? I don’t. I stopped caring. Whatevs. It’s a little pee. If you notice me peeing on myself during the excitement of a race, than you’re probably paying way too close attention. Focus on your own race, buddy. Serves you right.

My friend was a bad-ass runner back in the day. Unlike myself, she has muscle memory from running cross country at the collegiate level. I know what you are thinking because I am thinking it, too. It won’t be long before she’s lapping me out there on the trails with a sub-8 min / sub-7 min pace. Maybe I’ll surprise myself and keep up with her. It’s only taken me 21 years to go from a 9;30 min pace to 9;15 min/ mile pace, after all. Sky’s the limit!

The very next weekend was the first Friends of the Fells 5k trail run and festival at Medford High School. I’ve been an active member of the Friends of the Fells running club this fall, but I was not involved in planning of this event. I didn’t know what to expect since the club is pretty small and laid back. It was a much bigger deal than I thought it would be. They got Whole Foods as the main sponsor along with several other companies, like Marathon Sports. There were booths on the athletic fields, a kids fun run, and medals for age groups and overall winners. A couple hundred people ran it and far more attended the festival despite some wind and a bit of rain. It was also a mid-day run which is fairly unusual, but probably good news for families interested in the festival aspect of it.

The popularity may have something to do with the proximity of the location to Cambridge, Somerville, and Boston. There’s a real burgeoning interest in trail running and hiking with few places like the Middlesex Fells to do it in. I’ve observed that there are far more trail races in Essex County, with its abundance of open space and trails, but far fewer participants. The season is winding down now, but I wouldn’t be surprise if more of these trail running events appear on the calendar in 2017.

I got my friend the cross country runner to sign up for this one, too. It wasn’t very hard to convince her. I think she’s been bit by the running bug. There were also the Friends of the Fells runners, and the crowd from the Happy Soles Running Club. All in all, a very successful event with lots of friendly familiar faces. I only wish my own family came to this one, because I think they would have enjoyed it, but here I must refer you to the case of conjunctivitis I mentioned earlier. Sigh.

As for the run itself I felt good, but there were definitely some bottlenecks that slowed us down at different points. I don’t know how to avoid that other than I ought to position myself towards the front at the start and run like hell. Maybe one of these days I’ll give that a try.

There were bananas at the finish. Big, glorious boxes of them! 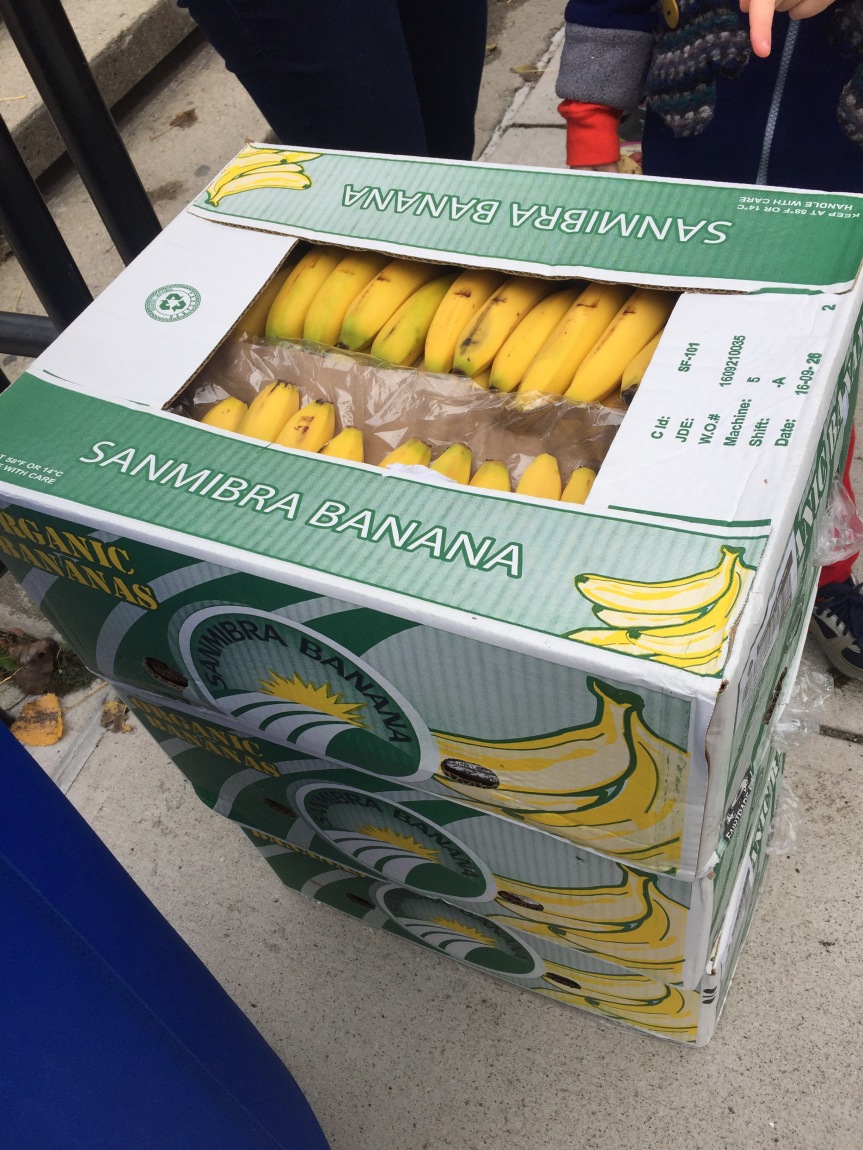 So these guys at Friends of the Fells meant business. This was the real deal. They put a lot of thought and hard work into the whole day, not just the race. I hope it becomes an annual event.

Here’s a clip of the kids fun run:

Yes, that is me in the Clinton t-shirt. This was taken two days before the slasher flick that masqueraded as election night TV coverage.

And yes, of course I am still with her, and still processing my complicated feelings about the outcome nearly one week later. Running has given me a productive way to channel my post-election frustration and discontent. I might be in MA, but I am related to plenty of Trump supporters here. Plenty. In an effort to understand and make peace with this outcome, I’ve purposefully had several difficult conversations with said family members and Trump supporters this past week with mixed results. These were generally exhausting and trying experiences.

Thankfully, there was one uplifting moment last week that had nothing to do with the election, and it was badly needed. I attended an event hosted by the running company Janji at its pop up store on Newbury St. Boston. If you haven’t heard of Janji yet, you probably will. It’s a running apparel store with an interest in social justice issues, like a Tom’s Shoes or Patagonia. The event was an open mic invitation for runners to come and tell stories on the topic of “running firsts.” The two winners, selected by three judges at the end of the night, each won a piece of Janji apparel of their choosing.

I was so in. Janji stuff is dope! I dragged my husband and a few supportive friends out last Thursday night to hang with a crowd of very fit and hipstery millennials and listen to some inspiring (and well-practiced, I might add) stories about running from local runners. Boy, did these runners bring their A game. It was a veritable Moth Radio Hour up in there.

I should have expected nothing less from the denizens of Boston/Cambridge/Somerville. Still, I was a little disappointed that my story didn’t win.

After all, I blog…

Janji is supposed to post the videos of each storyteller on YouTube. If they do, I’ll tweet it, or whatevs. I’m so down with all this social media stuff now… Anyway, I’ll let you know if they do.

I hope everyone out there is keeping their chin up. I am trying to “be the change” in my own life, as they say. It’s not easy but we all have to try harder, and be better, and do more.

What are you doing to make sure people in your community feel safe in the post-election climate?

Has the outcome caused you to reflect on your own views, or forced any uncomfortable conversations?

If running is a force for good in the world, which I believe it is, how can companies like Janji succeed at making it a better place through running?