In running sometimes we struggle and falter, but rarely do we go backwards. Like in life, the clock keeps ticking and we are carried forward relentlessly, thankfully, regretfully… Pick your adverb. Unlike in running, however, in life we sometimes experience moments that harken back to the distant past or usher in the near future. This convergence is a rare, beautiful kaleidoscopic moment in time.

Unerringly it’s my running routes from places I’ve lived or distinct periods of my life that have left the most indelible marks on my memory. Work sent me to Washington, D.C. for a couple of days last month and I had the chance to retrace the running routes that are as etched in my memory as they were well-trodden in my early adulthood. In the lead up to the trip I really obsessed over reliving my memories of running through the streets of Washington a lot more, frankly, than the training and panel discussion I was there to present to my company’s Washington office. Would I remember all the details of these routes? Had they changed at all? Are my memories even accurate? I will feel different than I did at 19, 20… But how different?

On Tuesday afternoon I got to find out. As I have so many times before, I charged up the brick sidewalks of M Street in Georgetown, passed the ritzy stores and restaurants, and hung a left over the Key Bridge.

Seen on my run:

This was the closest I got to actually stepping foot on Georgetown’s campus, for no reason other than there were a lot of sites competing for my attention on such a short trip!  DC is really a runner’s paradise.

On the other side of the bridge I connected with a paved section of the Mount Vernon trail. The path turned into a boardwalk that carried me over and through a brackish, swampy, almost mangrove-like area along the river’s edge. Every runner I passed that appeared remotely college-aged filled me with envy. I was reminded of what it felt like to “own” that run when I was a college student there.

Before long I emerged from the overgrowth and saw the familiar sight of Memorial Bridge leading the way to the Lincoln Memorial, with the Washington Monument behind it.

At this point I had to leave the path, sprint across a parkway, and scramble up the embankment in order to cross Memorial Bridge and return to DC… just as I figured out 18 years ago as a college freshman.

Nothing a little spit and polish can’t fix.

From there I ran back to Georgetown on the D.C. side of the river, past the Kennedy Center, the Georgetown University boathouse, and the restaurants on the waterfront, before climbing up the hill on 31st Street, NW and returning to work. All in all, a little over 4 miles covered at a 9:10 minute / mile pace.

So how’d it feel?

When you’re young, you can’t imagine how far you’ll stray from the formative experiences of early adulthood, and how much you’ll distance yourself from the concepts and contrivances of that time. If you’re not careful memories can – even simple ones like your college running route – start to feel foreign and made up, like a page from someone else’s life story. I needed to reconnect with that person who long ago used to loop the Key Bridge and Memorial Bridge like a boss. I needed to know she’s still in there and that I could summon her if needed. She was far from perfect but she had something that I’ve been missing for a long time.

On a brilliant Tuesday in late fall, on a run by myself on the familiar yet unfamiliar streets of Washington DC, I felt at peace with the old me, the new me, and the many iterations in between, and with my running, too. It was a great run. She’s definitely still in there, and that’s very gratifying to know. She wants me to get my leg fixed. She wants me to be happy as much as humanly possible. There’s a lot of lost time to make up for.

On this trip there were other great runs and a few amazing catch-ups with old college friends, too. 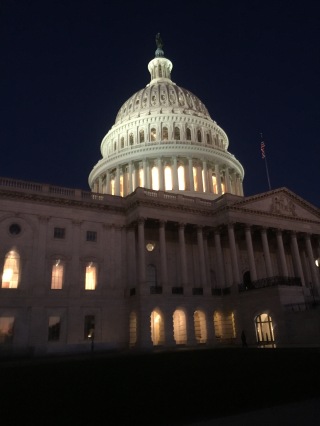 But upon reflection, I think the person I needed to catch up with the most was myself. Wow, that sounds nuts, doesn’t it? And if you’ll humor me a bit more, it was like running was my time machine on that trip. Without it, I don’t know if I could have felt so connected to a past that’s mine but has felt so very distant for a long time.

Does anyone else out there feel the most like themselves when they are running?

Do certain running routes have strong associations with specific periods of your life, or places you’ve lived?

4 thoughts on “Running Around Washington, D.C.”