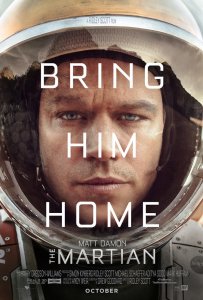 My husband convinced me to watch Matt Damon’s movie The Martian by telling me it would probably be a lot like the movie Castaway, my favorite movie of all time. Yes, Tom Hanks, I know; But I haven’t seen a movie I like more than Castaway since it was released 16 years ago. The ways in which The Martian compares favorably and contrasts with Castaway really got me thinking about survival tales, human ingenuity, passion, and drive. These are pretty attractive concepts to runners, so I thought I’d write about it and see what I come up with.

Overwhelmingly, The Martian is a story about human discovery and the limitless potential of scientific invention. Sure, it’s also about one man’s extraordinary will to survive and overcome all odds, but he doesn’t do it alone. His survival depends on the skill and sacrifice of many scientists working together on bringing Matt Damon back to earth (I know his character has a name, but come on, this is totally a Matt Damon vanity pic. Who cares what the astronaut’s name is, really?). There’s a huge leap of faith involved here, and at various points my practical brain wanted to stop the movie and call NASA to fact check the shit out of it, but I didn’t. I enjoyed the movie.

In contrast, the survival of Tom Hanks’ character in Castaway doesn’t require any suspension of disbelief in hi-falutin’ algorithms and rocket boosters. He removes a rotten tooth with the blade of a figure skate, for cris’sake. Resourceful? Yes. Ground breaking science? No. The figure skate scene stands out to me for several reasons. It epitomizes our human frailty. He’s brought to  his knees by something as small as a single tooth! It also represents the triumph of human will. He hacks his own tooth out with the most cumbersome, rudimentary tool at his disposal, an ice skating blade. I mean, what a contradiction.

I don’t want to take away from The Martian’s imaginative and intriguing application of scientific principles. It was the best part of the movie! But Castaway stands alone in my mind as the movie that best captures not only our basic human need for love and companionship, and what it must really be like to face a future without that, and to still choose, day in and day out, to go on, to survive, to have faith. In The Martian, Matt Damon doesn’t seem to contemplate the meaning of his existence on Mars, which is, you know, incredible. He doggedly works to forge communication with NASA and get back to earth. He is seemingly unwilling to contemplate a demise that doesn’t first involve leaving the planet. Can we just take a beat, Matt? Seriously?

I kept waiting for the story to reveal some love interest, or some grieving family members back home. Some hint of longing by way of a faded photograph in a space suit pocket or something. We get nothing. There’s barely a hint of a crack in his mental fitness. At one point, he grows out a beard and jokes that he’s a space pirate in international waters, but the quip is far from a mental break. If anything, it’s evinces his strong command of maritime legal principles! I mean, this is way out of step with the Castaway. The Castaway is so human in his frailty, and awe-inspiring in his transformation from middle-aged American working class every man to weather-beaten loin cloth wearing survivor man. 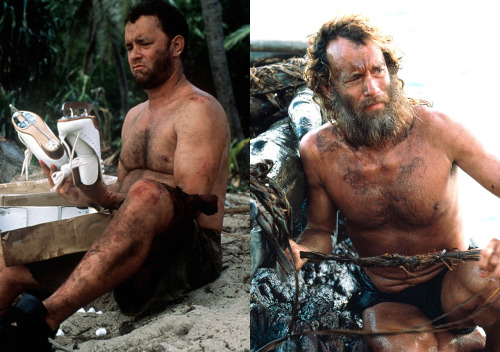 In one of the final scenes, he marvels over the ice cubes clinking in his glass much the same way he marveled over the futility of planning his own demise on the island. He doesn’t end up with the love of his life, but the loss pales in comparison with all that he has gained upon his return. Life. It’s like he’s been brought back to life, even though surviving is what he did day in and day out on that island. But what is living without humanity?  He has his Jeep, his Elvis music, his bottled water. The Martian has a far less satisfying ending. On some idyllic campus setting our astronaut is first seen sitting on a park bench, and then holding court in front of students in his seminar. He’s alone, and somehow removed from the action around him. This is the life he risked everything for?

Runners. We run because we can. Simple as that. If you’re running for a reason that’s more complicated than that, you may not be running for the right reason. Don’t run to prove something to yourself, or to others. Don’t run because you hate yourself, and running is punishment. It’s about feeling present and maintaining your body, our God-given personal space shuttles through the small slice of space and time afforded each of us.

It’s also about feeling connected to the world we call home; Connected by our breath, our pumping hearts, our pounding soles. That contact with the earth. We run because we can, and it’s a reminder of our humanity. The One and The Many. Tom Hanks contemplates death on the island, but when he realizes he can’t control the manner and means of his own demise, he has no choice but to keep going and hang on to a hope that someday he’ll once again live among men. Matt Damon also couldn’t bear the thought of dying alone on Mars, so he just keeps going. And we keep going. We all face those existential moments as runners, especially endurance runners. They’re intoxicating, that feeling that comes over you deep in a marathon. Running down the center line of the street you grew up on. Look how far I’ve come, life! I don’t know. We run because we can. And we are better for it.

What is the last movie that really stuck with you?

Why do you run?

When have you had an existential moment while running?

2 thoughts on “This Runner’s Thoughts on Stories of Survival: The Martian and Castaway.”