I have hit on something. It’s marathon related. I may not write much about marathons here, but the whole reason I started this blog is because I did not finish the Vermont City Marathon in May. Whether I like it or not, marathons take up a lot of psychic space in my head.

Now, to my point. This is the week that runners  find out if they’ve been selected to run from Hopkinton to Boston in April. All these tweets and posts from (the very fast and) joyful runners got me thinking about my own experience running Boston in 2009 as a charity runner, and how it was different from the other marathons I’ve run, not just because I had the added pressure of raising thousands of dollars (yes, there was that, too), but because it was the only point-to-point marathon I have ever done.

They bus you out to Hopkinton. There’s only one way back. You run there. You don’t stop until you’re at Copley Square. These facts are the unalterable facts of running the Boston Marathon. The course  does not change.

Now let’s take the Marine Corp Marathon, my first marathon, the one that got me hooked. It was 1999 and I was at the beginning of my sophomore year at Georgetown. No one I knew on campus had a car, so that morning I walked over the Key Bridge to get to the start. I was able to find a course map from ’99 courtesy of the Washington Post archives. It’s my understanding that this course has changed a lot since ’99, which is a shame, because I really liked it the year I ran it. It was a great course. Not point to point, but circuitous in a way. Maybe it meandered at points but it really did just circle the entire city, making sure not to miss any of the major landmarks along the way.

The beauty of this course is that you didn’t cover the same ground twice. Sure, you double back to pass the start at the Iwo Jima memorial to cross the Key Bridge at mile 7, but from there through mile 23 you’re basically taking a scenic tour of majestic monuments. And you’re making your way around the city, gradually. Miles 24-26 is a straight shot to the finish. That’s exactly what you want at this point in a race. No loops or turns or craziness. Just a straight shot. You know where you are going the entire race. There’s forward momentum. It was a pretty near-perfect marathon course, if you ask me.

On to the races I had problems with. The Nashville Country Music Marathon (2008) and VCM (2016). These two races have one thing in common that I’ve discovered is a total mindfuck for me. They are clover-shaped courses. Both routes start at the city center, head out in one direction to some far-flung turning point, circle back, go out in the opposite direction for miles, circle back… And so on.

The Nashville marathon, seen here, is more of a three leaf clover: 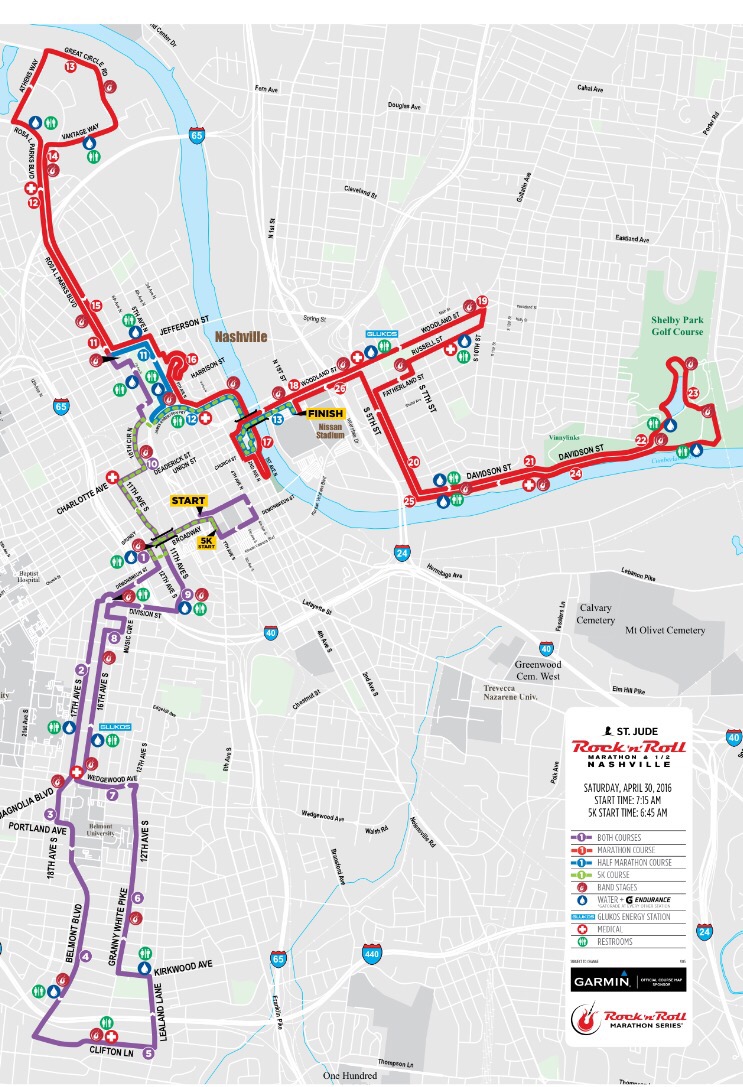 My recollection of this course is primarily “Oww, my leg is killing me,” and secondly, “Where the fuck am I now, and where the hell is the finish?” This  was only my second marathon so I did not reflect too much afterwards on the dim sensation that I was running myself into a tangled knot around Nashville. I moved on to training for Boston, which I did successfully the next year. 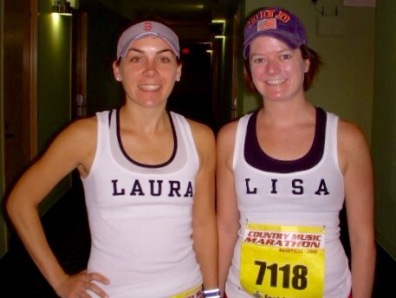 That brings us to the DNF. Vermont, a four leaf clover course if I’ve ever seen one – albeit a sad, wilting clover. Not a very attractive course to look at, is it? 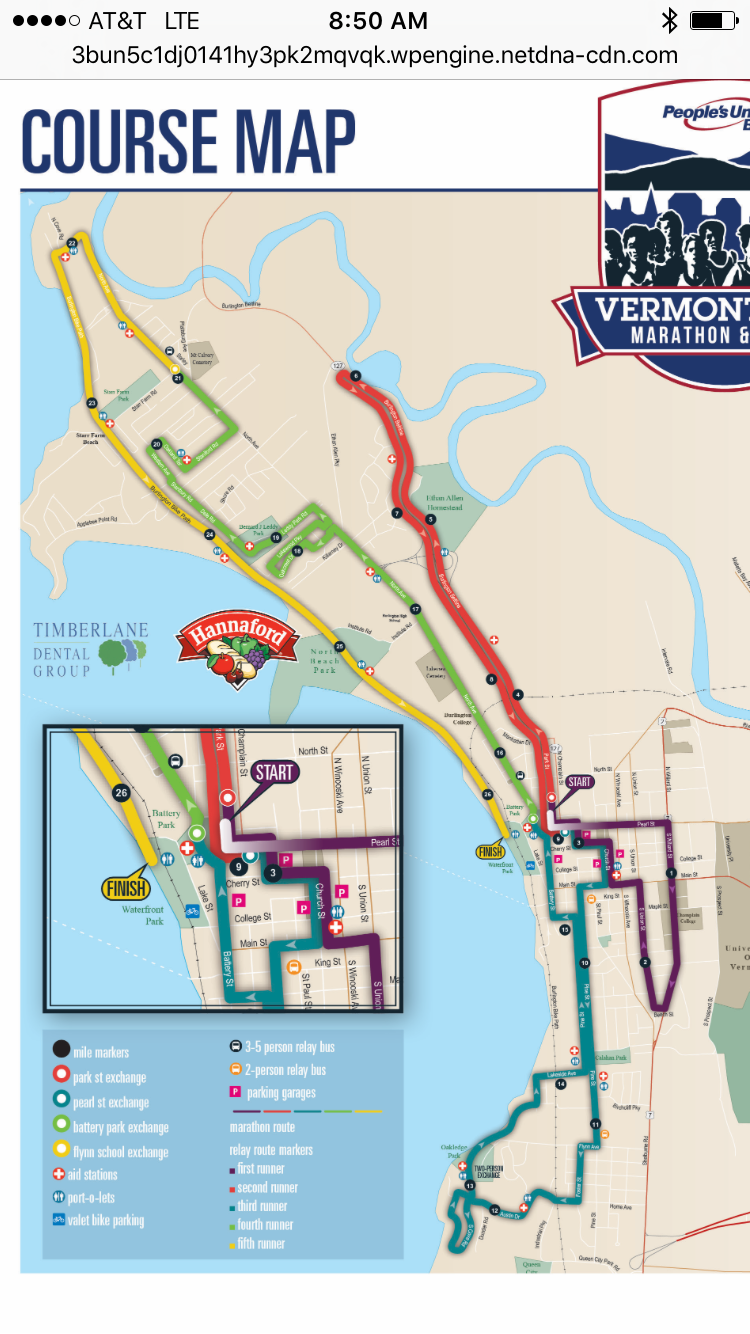 Do you think race directors give much thought to how a course appears? I have no idea. The final route of any major marathon is the result of lots of considerations including public safety, traffic flow, optimizing volunteers, among other things. I can’t criticize race directors for their race courses when they have to design these things by consensus. I’m just saying that for me, it’s a mind fuck when, for example, at mile 18 in Nashville you run past the finish and keep going further and further away from it until finally, at mile 23, you get to turn back and head for the finish. In the trance-like half-thinking state that takes over deep in a marathon, it’s hard to tell yourself “Oh, no biggie.” All you’re noticing as you move away from the city center is the diminishing crowds, the quiet, the urban to suburban shift. It doesn’t feel like you’re getting closer. It doesn’t feel like you’re nearing the end. It starts to feel like you’re in no-man’s land. That’s not what you want to feel like, even if in actuality you’re a few mere miles from the finish.

At this point, I’m so convinced of my own theory that I’m revising my own tale of woe. It’s quite possible I wouldn’t have quit the VCM at mile 15 if it wasn’t a clover-shaped course. At mile 15 I wasn’t so tired or in so much pain that I had to walk.

I was very slowly chugging along. I was wondering where my family was, and how my husband was managing in the heat with two challenging toddlers. We were nearing the city center again for the third time and I was hoping to see them. I said to myself, “If I see them I will stop. At least for a minute. Or maybe… I will just stop for real.” The seed was planted. It was either that or climb that hill out of the city and move away from the finish for several miles. If I got in trouble “out there,” between miles 16 and 22, I’d be a long way from home. And then they appeared curbside, my family, right as I was passing through the downtown area. They looked sweaty and bored until they saw me coming toward them, with my arms wide open. When they saw me, and their eyes lit up in recognition, I knew I wasn’t going to keep going.

But imagine if the course was a big meandering loop?  Or even better, a point to point?  Imagine what thoughts I would have had with every step? Closer, closer. I’m getting closer. There’s something satisfying about not seeing the finish… until you’ve finished. During the Boston Marathon stopping was inconcievable to me. My practical brain saw no point in that. And then what, call a cab?

I’m not saying the clover-shape was the only reason I dropped out at mile 15. There were lots of reasons why that day was not my day to run 26.2. It was only Memorial Day and the temps reached the low 90s that morning. People were dropping like flies, as they say. I was battling a pretty serious bout of depression that was somehow mixed up in, and related to, the physical issues I was experiencing during marathon training. I also came down with a pretty bad virus when I was supposed to be peaking, forcing me to miss a week of work and a crucial 20 miler. Getting over a virus isn’t the same as going back to running after a week off. It’s like taking a week off, and also mysteriously losing a ton of stamina and strength in the process. So I almost didn’t go to the race at all.

But I did go, because my depressed mind knew that not going would be another reason to stay depressed. I had to see it through, in some way or form. So I went to Burlington and through the motions of checking in to the hotel, going to th expo, even running the race blandly, numbly. Nothing feels like it’s supposed to when you’re depressed, even something as familiar and natural to me as running.

My kids, though. I could feel OK with my kids. I needed their company and the love of my husband to pull out of that depression. I didn’t need to run away from them and up some goddamn hill to the furthest reaches of Burlington, VT, though. Nope. They were, and will always be, my destination and reason for living. And that day, at mile 15, I was right where I needed to be.

But everything might have been different if it was a point to point. There. I said it.So sue me.

Have you ever thought the race course was messing with your head?

Have you ever dropped out mid-race?

What is your favorite kind of course and why?

3 thoughts on “But of Course: Comparing Major Marathon Routes ”

Don’t let the bastards keep you down, or in this case, germs
There are some very silly online workouts on YouTube. Fortunately I’ve got nothing but time to go through all of them...
This was supposed to be a selfie with Stan but he had other plans that involved rolling around in pine needles. Can’t blame him, a hike on a sunny 60 degree day has me rolling over too. #traildog #terriersofinstagram
Preeety preeety proud of myself
I have an important conference to attend in April and I want to feel my best. I’ve been working hard preparing mentally and creatively. Now, to turn back to the physical me. Werk outs, many werk outs, are in my future.... 🔮📈📅
#dollypartonmemechallenge #terriersofinstagram #kidsanddogs
My Tweets